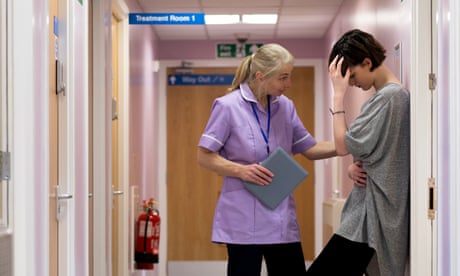 But one of the most pressing and overlooked issues to come out of my report is that failings in mental health care can involve violations of the most basic human rights of patients. Our report highlights the case of a woman who had a life-threatening reaction to the anti-psychotic drugs she had been given during a psychotic episode. Her physical symptoms were then ignored. The failure to fulfil her basic right to medical care led to her tragic and preventable death.

A mark of a decent society is how we treat our most vulnerable citizens. When people are in crisis it is fundamental that those trusted to care for them respect their human rights. This means treating everyone, especially those detained under the Mental Health Act who may lack capacity to make decisions about their own wellbeing, with respect and dignity, and not, as one case study in our report shows, leaving a mental health patient, held in seclusion, to menstruate into a plastic cup by failing to provide her with sanitary towels.

In one case in our report the wellbeing of a young person with bipolar disorder was severely compromised when care providers failed to carry out a risk assessment on another patient and the young person was assaulted. A failure to take precautions to keep someone safe when receiving mental healthcare is a breach of human rights. By highlighting this, we want care providers to prioritise the fundamental values of freedom, dignity and respect.

I visit many NHS hospitals throughout the year and I see much great work being done by staff in very difficult circumstances. And it is important to emphasise that the cases in my report are not systemic across mental healthcare. However, we should never have to ask any care providers to consider whether they are treating people in a decent and respectful way, or see cases coming to us where care appears to be Dickensian in its lack of compassion. Sadly, my findings highlight too many cases where this reflection is necessary.

David West was a young man whose case we investigated. He was discharged from a local community mental health service without a care plan in place because he missed one appointment. His GP was not informed and he was left without the drugs that he was reliant on, effectively in a no man’s land of care. He died of a drug overdose as a result. No one should ever feel that they have been abandoned or shut out by the NHS that was established to help them.

The British Institute of Human Rights produces valuable resources on how these rights should be considered within a mental healthcare setting, but such resources are only valuable if they are used. We see far too many cases where they are not.

It is only by embracing a culture change that embeds human rights into the way we think about mental healthcare that we will give patients the service they deserve. For the parliamentary and health service ombudsman, that means more frequently expanding our focus beyond service failure to include issues such as compromised dignity and loss of liberty. By filtering our own investigations through a human rights lens, we will be able to emphasise their importance when we report back to those whom we investigate, and, ultimately, this will impact on the approach to care. We must learn from our European counterparts and work even more closely with the Equality and Human Rights Commission if we are to realise the essential improvements in mental health services that are needed.

Rob Behrens is the parliamentary and health service ombudsman