Dundee has one of the highest rates of suicide in Scotland as the national figure rises.

There had been a dip in overall rates across Scotland between 2013 and 2015, but it has steadily risen since then.

In Dundee, 19 people per 100,000 people have committed suicide in the last five years — second only to the Orkney Islands with 20.1.

Dundee City Council launched a campaign earlier this month, focusing on social media, that highlights where to go for support.

Across Scotland, the rates for men are three times higher than for women.

The National Suicide Prevention Leadership Group is expected to publish its first annual report in September.

As of the end of April this year, there has been more than 2,800 referrals to specialists help from front-line services.

“An increase in deaths by suicide last year is concerning and is sadly reflected in other parts of the world, too.

“We remain committed to building on the overall 19% decrease in suicide rates in Scotland between 2004-2008.

“Alongside mental health and suicide prevention groups, we are working to raise public awareness and improve crisis support services for at risk groups.”

“More than two people a day are dying by suicide and there has been an unbelievable rise in deaths among young people.”

Scottish Conservative MSP Annie Wells said: “The Scottish Government may have spent more time talking about mental health in recent years, but these figures show that hasn’t been matched by action.

“We’ve gone backwards and the hundreds of who took their own lives last year are a tragic testament to that.”

A former factory in Dundee city centre will be turned into a mental health support hub.

Dundee City Council has given permission for the largely empty Locarno Works near Dudhope roundabout to be re-developed into offices for charity Wellbeing Works.

The local charity, which has offices in Panmure Street, offers arts and crafts, music sessions, work training, cooking skills and other activities aimed at building the confidence of people with mental health issues.

It is expected the new premises will be ready some time this year, allowing them to expand their activities.

Wellbeing Works chief executive Wendy Callander said: “The offices would be purpose-built and we are all excited about the plans. 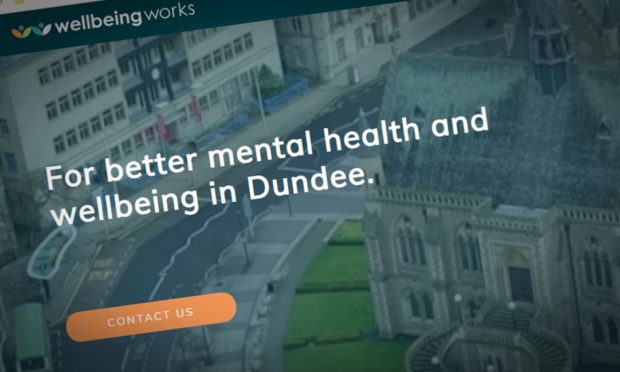 “Getting the planning permission was means we’ve got over one big hurdle, but now quite a significant transformation of the building needs to take place.

“The building is structurally sound but it’s basically an old warehouse.

“We are looking to build a kitchen, a creative space, offices and meeting rooms.

“We’re also hoping to be able to extend our opening hours.

“Currently we work nine to five, Monday to Friday, because the building we’re in limits us.

“I’m hoping this new building can really become a community hub that can be opened up in the evenings and weekends.

“We’ve been on the look-out for new premises for the past three years so I’m quietly optimistic we can open some time this year.”

City architects Andrew Black Design lodged the application on behalf of Broughty Ferry firm Torridon Developments, who are in charge of the building and will rent it out to Wellbeing Works.

Hans Grabowski, associate at Andrew Black Design, said: “We still need to get a building warrant so I’d estimate it will take about four months before it can be open.

“The area was originally zoned for industrial use but local planning policy has recently changed.

“There wasn’t much demand for industrial use, which is why many buildings in the area are neglected.

“Now that the council have changed their policy it’s hopefully going to become easier for other users to establish themselves there, and hopefully we’ll see an improvement in the area.”

Football match, in memory of Dundee man Harry who took his own life, raises £1k

A memorial match has raised more than £1,000 for charity.

The match took place at Downfield Junior football ground on May 19.

Harry had played for Dundee Football Club since he was 12 and was 17 when he died.

His friend Kevin Milne, who also played for Dundee, arranged the match.

After the match those attending went along to Doc Stewart’s where there was raffles, drinks and karaoke.

Harry’s mum Jacqueline Hawes said she wanted to donate to Andy’s Man Club due to how they support men’s mental health.

Andy’s Man Club was formed in 2016 and has now spread across the UK.

The Dundee group meets at the Boomerang Centre on Mondays at 7pm.

A former Craigie High pupil who lost his best friend in 2015 has organised a charity football match in his memory.

Kuba Sterna was just 16 when he was found dead in his home in 2015 but his memory still lives on with pals who are hosting the match on June 2.

Matt Ronan has set up The Kuba Cup to help raise money for Papyrus, a charity which helps prevent young men’s suicide.

Matt, now 21, said: “This charity helps prevent young suicide which, at the of 16, I was very significantly affected by. I wanted to honour Kuba and organise an event like this I felt it was the right thing to do.

“I hope the community will get behind the match and donate some money in the collection buckets to raise much-needed cash for a very worthy cause.

“I have a group of pals that were all school friends of Kuba, plus some other friends who didn’t know him but want to support the cause who will be playing, too.

“I have wanted to do a yearly event for a while to keep Kuba’s memory alive but I just didn’t know what to do or how to do it, so I just thought I would go for it with the match.

“All the local businesses who are helping out have been so supportive and have told me they will try and make it even bigger next year.

“Kuba was something else – you could be in the worst mood ever and he would make you laugh, he was just that type of guy.

“I am also working closely with his mum, and the family are going to be putting on a barbecue during the match to raise more funds.

“Anyone and everyone who wants to come is more than welcome. We are already expecting a big turnout but the more the better.”

Sporterz of Dundee have sponsored the event providing a trophy and medals for the winners. There will also be a tuck shop available throughout the game and following the match the event will continue in the Fairfield clubby with a buffet and DJ and even an auction.

The event starts with a noon kick-off at Fairfield Community Sports Hub.

The match is not the first time that Kuba’s school friends have got together to fundraise in his memory.

In 2016 a group of former school mates, including Matt, raised an impressive £900 for a memorial bench to be erected at Broughty Ferry harbour.